home - blog - Linen History - What is a huckaback towel?

What is a huckaback towel?

A huckback weaving pattern, also known as huggabag, huck-a-back, huckabag or simply huck, is an old weave that is still used nowadays for towels. The name ‘huckaback’ may have been adapted from ‘hucksters’, known from around 1200. Hucksters were pedlars and used to sell linens in markets, after carrying goods on their backs.

According to Patricia Baines, an author of several publications on flax and linen, huckaback pattern produces a specific uneven surface which allows towels to absorb water better and dry off quicker. Many derivations of the huckaback weaving pattern have been found in folk weaving, especially in Germany and Scandinavia.

Huckaback towels have a good grip, are sturdy and extremely absorbent. Towels made of huckaback weave fabric dry the skin very effectively; towel-drying your skin with huckaback also stimulates the blood supply leaving you revitalised and fresh.

Huckaback towels won’t take up as much space in your wardrobe as conventional cotton towels, they are perfect for spa or the beach, and are durable, lightweight and environmentally friendly. 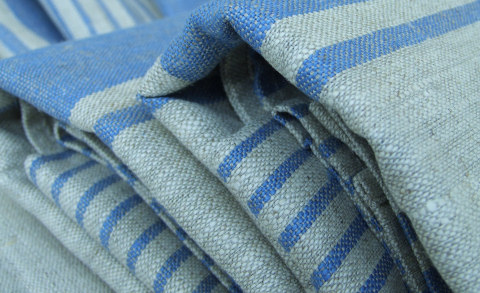 For a number of years, I’ve searched for terminology related to my family surname of Huckaba. We’ve traced my family’s origins to England, but this is the first I’ve learned about the huckaback weave. What fun! I do hope to purchase some towels with this weabe for my family members. My lineage also has a fair amount of German. What a great, informative post!
I’m hoping to source these towels from somewhere in the United States, or have them shipped there.

Where can I buy Hacklebacks towels in Great Britain please?

You could buy them here: https://www.linenme.com/huckaback-bathroom-towels

I have a few huckaback towels from 1930′ or 1940’s are these worth anything I have kept them because they are old and in very good condition,some unused.

Antique white linen huckaback towels sell on on-line auction sies for $8 – $15, depending on size and condition. If they have fancy monograms and / or handmade lace attached, then double that. Lovely things!

You could buy it from LinenMe.com – Fabrics

Excellent information. I was looking around for this information from long time