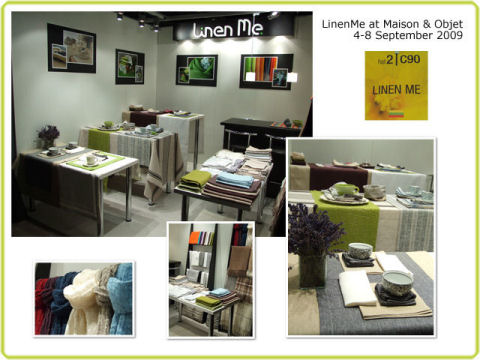 Maison & Objet, certainly one of the most important trendsetting events in the world of home décor and design, has just taken place in Paris, France. It was the fourth time LinenMe designer Inga Lukauskiene visited the show, but the first time she took part as an exhibitor.

For the first time LinenMe, a brand of high quality Lithuanian linen, had its stand at Maison & Objet, presenting some of the best current collections of table linen, bed linen, kitchen linen and bath linen, as well as showcasing new products.

“Even though this is the first time LinenMe exhibits at Maison & Objet, I already knew what to expect and how important this trade show was,” said Inga on her return from Paris. “I managed to see some fantastic textile designs from all over the world, as well as present the most exciting linens from new LinenMe collections.” 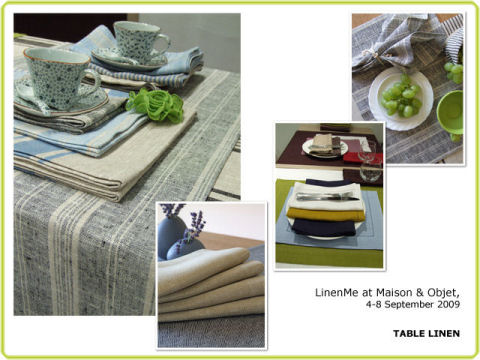 New LinenMe ranges to look out for are Romb and Provance. They attracted the most attention from visitors at the show, and will be available via LinenMe online shop at the end of September 2009. Not long to go!

What are the ‘hot’ colours of the forthcoming season? Inga Lukauskiene points out neutrals, especially classic white and black. In addition, LinenMe will soon be launching new products in five accent colours (aubergine, violet, cintrine and others). 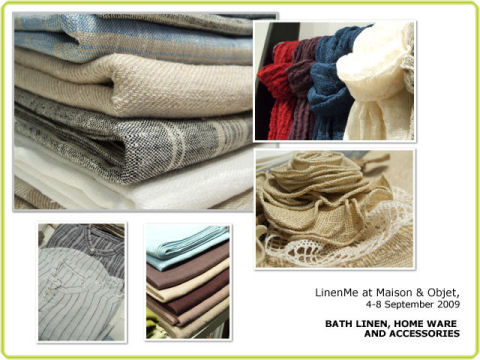 Textile pavilion at Maison & Objet had fantastic exhibitors this year, admits Inga: “Some of textile designers who exhibited at Maison & Objet specialise in specific categories of home linens (such as table linen, bed linen or bathroom linen), whilst others offered a much wider, varied assortment of designs. However, there were not that many focusing solely on flax products, so we had a good chance to be notable.”

Like any exhibitor, LinenMe received some valuable feedback. “Comments at our stand were mainly related to the quality of our products, as well as flawless finish, craftsmanship and affordability.”

The majority of show visitors are interior designers and retailers; according to Inga, not many of them knew the qualities and characteristics of Lithuanian linen. The fact LinenMe products are made of 100% European linen seemed to be a huge advantage, as there have been cases when huge companies known for their European linens have switched to trading ramie products from China.

Apart from being a great platform for up and coming designers, Maison & Objet is a great place to conceive ideas for the forthcoming product ranges. Inga admits that this year she felt it was linen clothing and perhaps homeware where she would like to expand her expertise: “You won’t believe this, but the most interesting thing I noticed at Maison & Objet this year was the number of people wearing linen clothes. There were crowds of them! This must be good news for LinenMe, surely!”

NEW! A brand new LinenMe product catalogue was published just before the exhibition. To get your copy (in a .pdf format) please click on LinenMe Catalogue.