home - blog - Linen Accessories, Linen History - Scarf – A Perfect Garment for Any Occasion and Any Time of the Year

What is the most never-out-of-fashion thing in your closet? Yes – a scarf! Worn to provide a splash of color on a plain outfit, to shelter from the cold or to protect a hairdo, scarves do women’s work in a wardrobe. 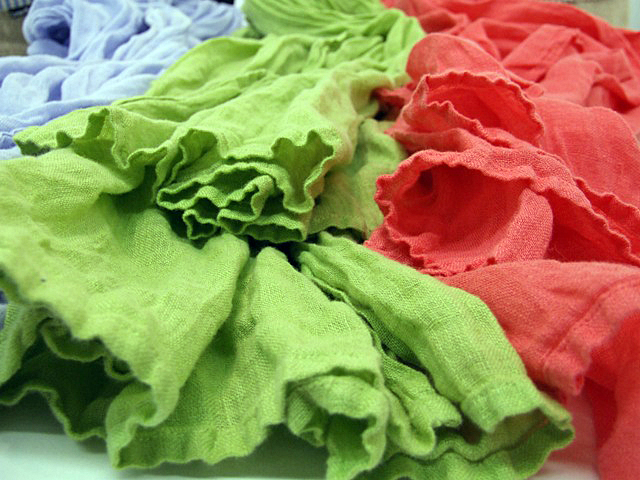 It is thought, scarves became popular accessories in ancient Rome, when some cloths were worn to wipe sweat from romans‘ necks and faces.

In the 18th century, men and women alike wore neckerchiefs, no matter of the social class they belonged to and the trend rapidly grew on people. In the 19th century, the cravat became again a fashion accessory for men and a basic item in every man’s wardrobe.

Needless to say that the 20th century saw different types of scarves inspired by the old trends and combined with the new ones.

In cold climates, a thick knitted scarf, often of wool, is tied around the neck to keep warm. This is usually accompanied by a warm hat and heavy coat.

In drier, dustier warm climates, or in environments where there are many airborne contaminants, a thin headscarf, kerchief, or bandanna is often worn over the head to keep the hair clean. Over time, this custom has evolved into a fashionable item in many cultures, particularly among women.

The most popular are ladies’ silk scarves, cotton scarves and linen scarves.

Silk scarves range from lightweight to delicate and gossamer light and can be worn in many different ways like, for an example, as a head covering, a belt, sashes, and an accent piece or just like a shawl. What makes silk scarves so special is the fact that their made of silk. Silk was, for centuries, given the reputation of a luxurious and sensuous fabric, associated as such with wealth and success.

Wearing a linen scarf you can keep cool and fresh, even on the hottest of days. Linen textiles are some of the oldest in the world, dating back many thousands of years. A linen scarf is an excellent choice as the material is absorbent and a great conductor of heat. If you want a scarf that will last you a long time and keep your cool even in unbearable heat, then a linen scarf is the one to go for.

Nowadays, cotton scarves have become a very popular choice among fashion-savvy individuals and even among the less style-conscious people. For one, they are very useful – especially during cold weather – but are great to wear anytime. Cotton scarves do their job well and can easily keep you very warm and cool – depending on the time of year and situation. Not only that, but they are also a lot cheaper compared to other garments.

Compared to jackets, warmers, leggings and others, scarves are a lot less expensive but provide just as much function for the money. Not only that, but there are many different designs, styles and kinds of scarves that have popped up in recent years; which means there is a style for everyone’s taste and preference. Because of the multitude of designs available to the consumer, people have been able to wear scarves on all occasions.

You are right. The scarf you gave me is just as warm as wool when outside and nice and comfortable and attractive with coat and all winter garb off. I got through winter because I felt that great feeling you linen has on the skin because I did not want to take it off. Lots of compliments, and nice and long to wrap and wrap around one’s neck. The colors you have introduced are rich and luxurious. Congrats on being the “spirit” that you are. C